The two starting QB’s showed why they deserved to be the MVP’s in this lopsided win by Sweden. 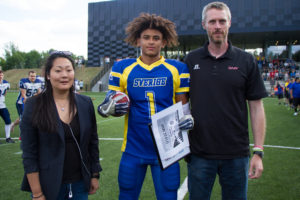 Leading up to the game, big things were expected for the Swedish quarterback, Michael Cox Jr. Cox Jr., whose football background was played in Miami, without a doubt lived up to the expectations. Even though he did not play much, it was because of his big plays early that the Swedes pulled away from team Finland. With his long strides and shifty moves, the Swedish star rushed for 248 yards on only 8 carries; with four of those carries ending up being scores. Cox Jr. also showed his deep ball accuracy as he had 132 yards on his 3 completions and several balls that should have been hauled in by his WR’s. 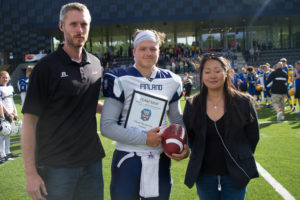 Team Finland never seemed to believe that the game was lost, and at the front of the comeback attempt, one player especially stood out. QB Viljami Rautavirta did not back down and all through the game, the gunslinger kept drives alive using both his arm and his feet.

Rautavirta ended up with 4 total scores, 3 passing and 1 rushing.

Especially the young quarterback’s calmness and ability to avoid rushers, and keeping his eyes down field, finding several of his favorite targets, popped up through the game.

Team stats and player stats can be found here.